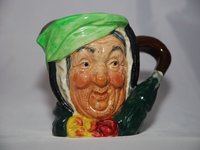 The definitive difference between the toby jug and the character jug is that a toby jug depicts the whole person, and the character jug only the head and shoulders. Charles Noke had in mind characters from English song, literature, history and legend, designed to appeal to future generations. It took him almost ten years to be satisfied with the standards of design and production, but in 1934 the first character jug was launched. He chose as his subject John Barleycorn, a figure symbolising whisky.