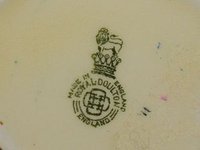 The Royal Doulton Company was an English company producing tableware and collectables. Operating originally in London, its reputation grew in The Potteries, where it was a latecomer compared to Spode. Royal Doulton figurines and china tableware have come along way since John Doulton made a £100 investment in 1815. For he used his life's savings to launch a partnership with Martha Jones and John Watts at a stoneware factory in Lambeth, London. You could say the rest was history. But this was, in fact, making history. Today, Royal Doulton is a world-class brand in quintessential British tableware, collectable figurines, crystal and glass, and giftware